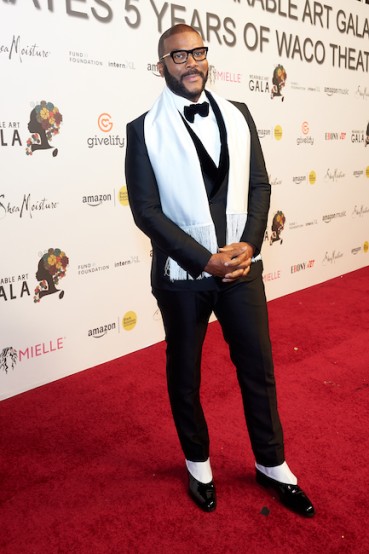 Founded by Richard Lawson and Tina Knowles-Lawson, The WACO Theater Center – abbreviated for “Where Art Can Occur” – is one of the few Los Angeles cultural institutions dedicated to contemporary performing and visual art of the African Diaspora and providing a space where “we can celebrate an individual’s artistic creation and self-expression through theater, reflecting fine art, innovation, craftsmanship and inspire imagination,” as noted by Playbill. The WACO Theater Center hosted its fifth annual gala this past Sunday, October 23, driving support of the center’s goals.

As a longtime supporter of the organization, Tyler Perry attended the star-studded event wearing a classical look to match this year’s theme, Harlem Nights: an ode to the aesthetics of the Harlem Renaissance and the 1989 hit film of the same name, starring Eddie Murphy and Richard Pryor. Inspired by the film’s costuming, Tyler and many others donned their most dapper attire and hit the red carpet before enjoying live music and a fine art auction, the proceeds of which directly support the Center’s mission and multifaceted programs.

Click here to learn more about The WACO Theater Center’s events, team, and facilities, and how you can support their work today.