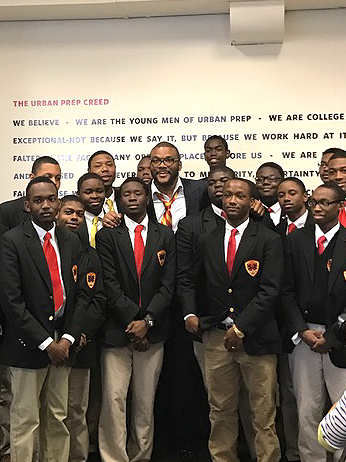 Tyler Perry spoke to a group of 200 students from Urban Prep Academies about the importance of setting goals and determination.

Perry discussed about his personal route to success and the values that have helped him achieve his wildest dreams. Chief among these values is the importance of helping the African-American community in Atlanta, where he employs minorities at his production company and studio.

“When there’s an end goal, a destination, it makes sense to me,” Perry explained.

Urban Prep Academy has garnered nationwide attention for its incredible success in Chicago. For seven straight years, the high school which boasts a student body from the inner city, has had a 100% enrollment rate at universities among graduates.

Among the chief tenets Perry discussed with the students was the importance of ownership and overcoming adversity. “People told me, ‘You’re not going to make it. You’re poor, you’re black.’ There’s a voice in the back of my head that told me they’re not right.”

Read more about Tyler Perry’s own struggle and how he applied values and faith to become an international success in his bio.